In Austria, the beginning of plastics recycling is inseparably linked with the name Osterberger Kunststoff Verwertung (OKUV) Blaimschein. Karl Blaimschein, who founded the company in 1974 on his agricultural estate, the Osterbergergut in St. Marien, Upper Austria, is considered a pioneer in plastics recycling. His son, Karl Blaimschein Junior, involved the company in contract recycling as a specialised niche supplier for industrial partners in plastics production. On the 1st of June, Michael Blaimschein took over the family business as the third generation with equally ambitious goals as his predecessors.

During the first few years, OKUV focused on recycling fertiliser bags and agricultural film material, which until then had mostly been disposed of. To collect the waste material, the company founder was able to get the assistance of the local fire brigades, who collected the material and brought it to special collection points for a fee. Over the years, the range of materials to be processed has gradually expanded significantly. Today, OKUV focuses on grinding and pelletising clean plastic waste (PE, PP, PS, ABS and PC) such as films, closures and sprues, which it does on a contract basis for more than 40 industrial partners in Austria and neighbouring regions. As a recycling service provider, the company also takes care of logistics and interim storage, depending on customer requirements.

"Plastics recycling has undergone a massive boom in recent years. While this is very positive, it has also led to producers who were once our customers setting up their own recycling lines at their plants," is how Michael Blaimschein explains one consequence of this evolution. He describes the family firm's recipe for success as follows: "What has enabled us to hold our own over the years and what makes us strong is our flexibility and reliability as a full-service provider." For the company's industrial partners, most of whom are based in Austria, he wants to focus his attention even more on measures to further improve the quality of the recycled pellets produced in the future. "There are only a few regions worldwide where know-how in plastics production and plastics recycling is as concentrated as in Austria. Thanks to the grandfather's pioneering spirit and my father's energy, we have been part of this development, and today we are an experienced key player in the field of post-industrial waste for the implementation of a regional circular economy", says Michael Blaimschein.

"For us, it was always crucial to achieve the highest possible quality of recycled pellets. That's why we kept a close eye on the development work at EREMA and finally decided to switch to this recycling technology. Since then, we have had the best experience with this technology,"

Successful with EREMA as technology partner
OKUV Blaimschein's technology partner since the early 1990s is recycling machine manufacturer EREMA, founded in 1983 in Ansfelden close to Osterbergergut, and today recognised as worldwide market and technology leader in this sector. This partnership began with the trial takeover of a test plant in 1994. Just one year later, OKUV put its first new EREMA system into operation. Two more followed over the next two years, including the 1,000th machine EREMA had built in total up to that point. "For us, it was always crucial to achieve the highest possible quality of recycled pellets. That's why we kept a close eye on the development work at EREMA and finally decided to switch to this recycling technology when we gradually phased out our six plants from the early days. Since then, we have had the best experience with this technology," says Michael Blaimschein, who emphasises not only the recycled pellet quality but also the high process stability and ease of operation of the EREMA machines. He has also already ordered a new INTAREMA TVEplus machine, which is scheduled to start operation in October. 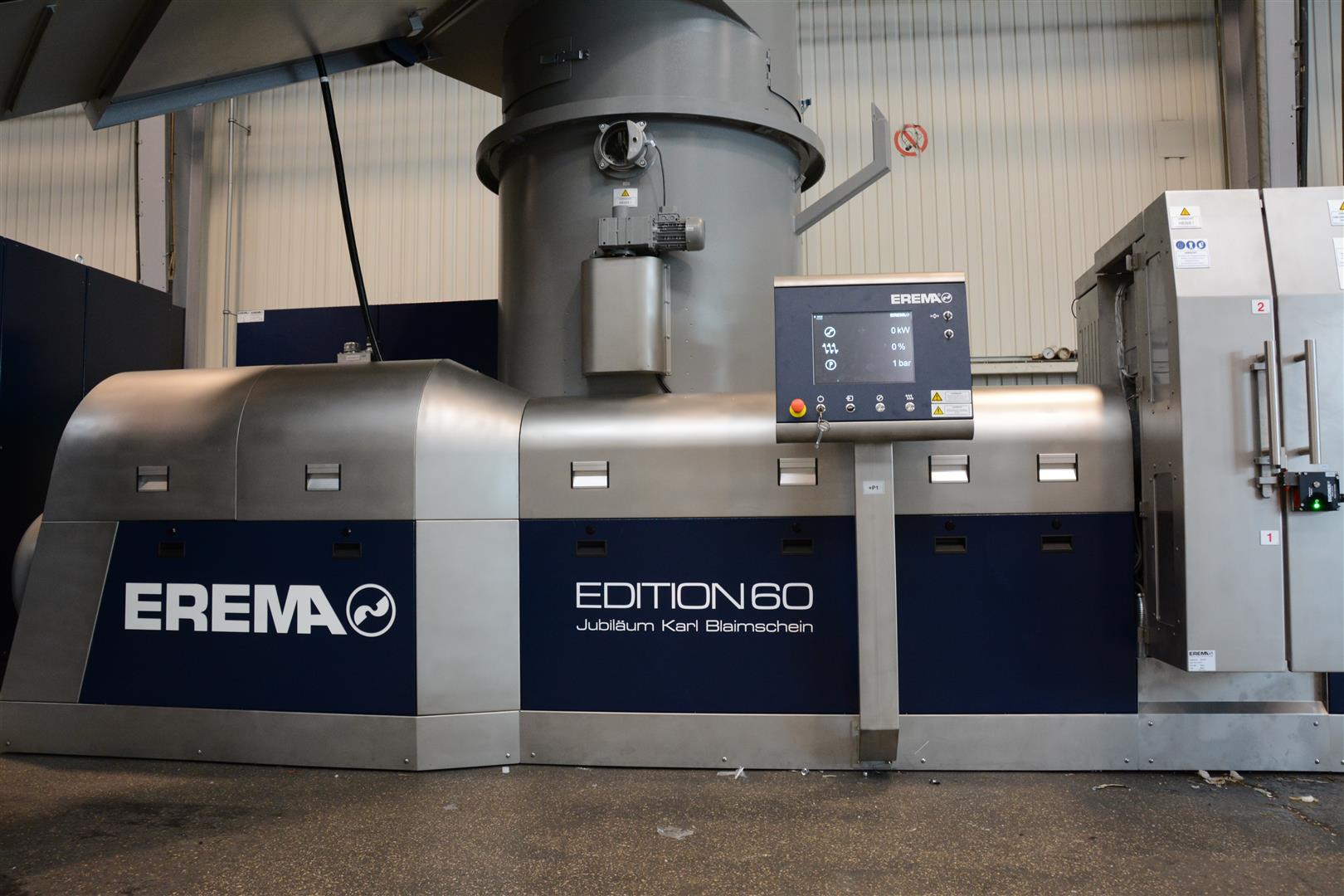 The INTAREMA TVEplus machine with SW filter that entered production at OKUV Blaimschein in 2015 received special branding to mark the milestone birthday Karl Blaimschein was celebrating at the time.

Kilometres of quality: the best recycled pellets for irrigation pipes